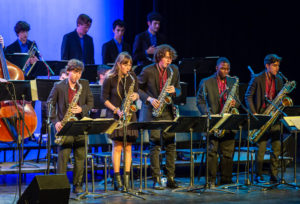 Jazz Ensemble A finished in 1st place in the season’s closing competition at SuperJazz at the Ranch at West Ranch High School. They were awarded $700 from D’addario, makers of woodwind reeds and strings for guitar and orchestral instruments. AMPA student William Brandt on alto sax was the festival’s most outstanding soloist winning a scholarship to the Brubeck Institute’s Summer Camp.